Wigan Central is the brainchild of Patsy & John Slevin. Their passion for real ale is infectious and the opportunity to open a bar dedicated to real ale in one of the most historic parts of Wigan was too good to miss.

The idea developed to embrace the memory of the long gone Wigan Central Railway Station, which disappeared 50 years ago, with an interior that more than takes a nod to the past. The hand crafted furnishings and decor is unashamedly 1940- 50’s railway inspired, along with a modern and fun twist. For example, on the walls you will find monitors showing “real-time” train times for the two Wigan Rail Stations that are just yards away! Giving you time to see if you can have that extra little half before you run for your train. 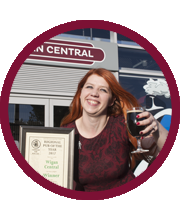 Jo has worked in the pub industry continuously since she was old enough to pour a pint. After 7 years as Wigan Central’s Bar Manager, in November 2021, Jo took over as the owner of the bar.

We’re looking for beer enthusiasts to join our team.

Are you passionate about great beer?

Do you know the difference between Real Ale and Craft Beer?

Do you enjoy talking about different beers?

We want people with passion and enthusiasm for our bar and our beer selection.

Email a copy of your CV now to info@wigancentral.bar